The Story of Source Water Protection

In May, the groundwater supplying the municipal well for Walkerton, Ontario became contaminated with E. coli. As a result of the failure of multiple protection measures, seven people died and thousands became ill after drinking the contaminated water. It was the catalyst for a public inquiry led by Justice Dennis O’Connor. Justice O’Connor made 121 recommendations to better protect sources of drinking water, including source water protection.

Protecting our drinking water is not a one‐step process. The image on this page (above) shows Ontario’s multi‐barrier approach to protecting municipal drinking water “from source to tap”. Source water protection is the first step in this multi‐barrier approach, followed by effective water treatment, operator training, testing and distribution before the water reaches your tap. By ensuring that proper protection is in place at each stage of this process, the likelihood of water contamination is reduced. 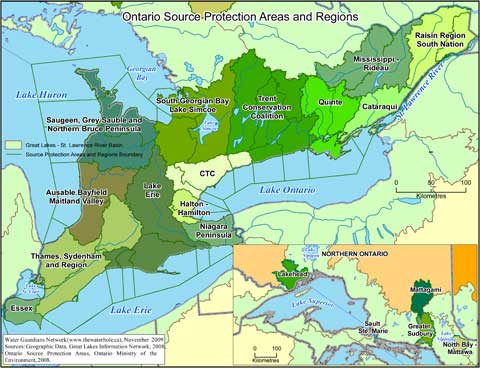 Click on the image to open a larger version.

One of the first tasks of the Cataraqui Source Protection Committee was to prepare a document called a terms of reference under the Clean Water Act, which identified the work plan for the source protection planning process, including research and planning, assigned roles and responsibilities, and established timelines and funding estimates.

The Cataraqui Source Protection Committee worked over several years with Cataraqui Region Conservation Authority staff, consultants, local
municipalities, and others to prepare an assessment report for the Cataraqui Source Protection Area. The Assessment Report identified areas where drinking water sources are vulnerable to contamination or overuse, and prioritized drinking water issues and drinking water threats within those vulnerable areas. The Assessment Report was prepared in accordance with detailed technical rules set out by the Ontario Ministry of the Environment and Climate Change. The report was approved by the Ontario Ministry of the Environment and Climate Change in 2011. The content of the Assessment Report was used to support the development of a Cataraqui Source Protection Plan. While working on the Assessment Report, a series of community roundtables were held to solicit early input from more than 250 local stakeholders in an effort to ensure local applicability at the earliest opportunity.

The Cataraqui Source Protection Plan came into effect on April 1, 2015. Implementation of the Plan is being carried out cooperatively amongst
implementing bodies, including municipalities, local health units, provincial ministries, the Cataraqui Conservation, businesses, and others. Resources to assist with implementation needs have been put together by Cataraqui Region Conservation Authority staff.

Be Social With Us!