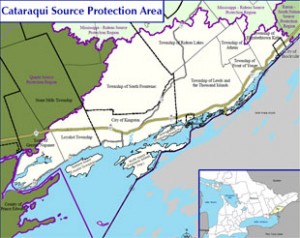 Click on the image to open a PDF map in a new tab.

The CSPA includes portions of three counties and all or part of the 11 municipalities within the Cataraqui Conservation’s jurisdiction, as well the Township of Frontenac Islands (Howe and Wolfe Islands). About 80 per cent of residents in the CSPA (approximately 170, 000 people) rely on municipal drinking water systems from surface or groundwater sources. The other approximately 40, 000 residents in the CSPA obtain their drinking water from private intakes or wells.

Be Social With Us!